The January birthstone is the Garnet, which is a deep red silicate mineral. Garnets have been in use as jewellery since the Bronze Age.

This gemstone is said to be named after the Pomegranate whose seed covers are similar in colour, size and shape to some garnet crystals. Although red is the most common, Garnet can also be found in many other colours including orange, yellow, green, blue, purple, black, brown, pink and clear.

Here is the verse for January from the Gregorian poem made popular by Tiffany & Co. in 1870

The properties and history of Garnet. 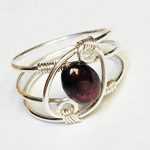 The Garnet is associated with prosperity and good health. Like many other gemstones, it was used by the Ancient Egyptians over 5000 years ago in the manufacture of jewellery. Many examples have been discovered and frequently buried with the dead. Pieces of jewellery featuring Garnet over 4000 years old have been found in Sweden. It was also presented in the Middle Ages, as a symbol of trust and affection and believed to protect the wearer from poisoning. It has been found that the Greeks were wearing Garnet signet rings around 400 BCE. 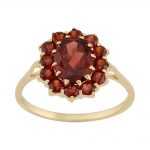 In addition, the January birthstone, has been used by travelers as protection from accidents for many years. Garnet is often presented as a gift and rumored to prevent nightmares and light up the night. A Garnet Ring will make a wonderful addition to anyone’s jewellery collection regardless of their birthday.

Garnets have decorated many royal garments around the world. They have even been used as ammunition in the belief that the stone is deadlier than lead. Many kinds of garnet can be found and the stone has many uses apart from the manufacture of jewellery. The most common, as an abrasive and the manufacture of “sandpaper”

Finally, a Garnet Ring is the perfect gift for anyone and there are many styles to choose from.

The ring featured here is a stirling silver January birthstone Claddagh ring from Gold Boutique. This ring is currently available at 59.00 GBP in UK sizes H-Z Click on the image to see more details and order this ring now.

Free Gift With Every Order