According  to The Gregorian Poem published by Tiffany & Co. in 1870, the Bloodstone or Heliotrope is traditionally considered the March birthstone. 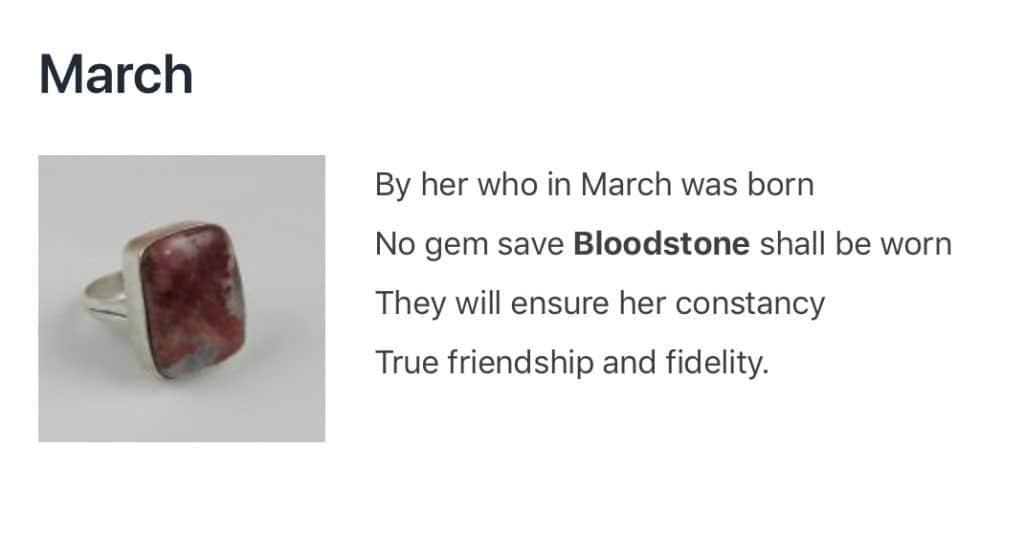 There have been some pretty bold claims made about this particular gemstone. Many are associated with the practice of Feng Shui.

Like most of the other birthstones, the bloodstone is alleged to have many healing and protection properties and believed to repel negative energy. As it’s name suggests, it has been associated with the purification of blood and of sacrifice. The wearer is believed to have a long life, good health and great courage.

Apparantly it can strenthen the immune system, promote positive energy and provide strength to the wearer. In ancient times the stone was ground to a powder, mixed with honey and used to cure tumors, hemorrhages or even snake bites. Simply looking at the stone was enough to prevent eye diseases.

Whether you believe such claims or not, this gemstone makes a great gift especially for someone who has a birthday in March. It is not an expensive item as much can be found in several countries including USA, Russia, Australia, Brazil and The Czech Republic.
The Bloodstone is actually a combination of chalcedony and jasper. It has the dark green colour of chalcedony with red specks of jasper making every stone totally unique. You may also find large areas of red as in the example shown and sometimes other colours scattered around the red jasper.

Bloodstone is also considered to be an alternative to Aquamarine as a birthstone for those born in March. Consequently, anyone whose birthday falls on this month has a choice of two gemstones as do those born in November

The colour of Aquamarine is unmistakable. From a deep blue to light bluish tint of green which resembles that of a clear ocean. The name itself is derived from the Roman words Aqua meaning water and mare which means sea. Ancient mariners believed that the stone was the treasure of mermaids and frequently used the stone as a talisman for protection in rough seas. As the deeper blue tones have become rare they are more sought after and can command a much higher price than the lighter shades.

Aquamarine is seen to represent youth, health, hope and eternity. Consequently this gemstone is also suitable for a gift as an anniversary ring.

Aquamarine has not been without it’s share of magical properties. Some of which are listed below:

There is no scientific evidence to back up these claims which originate from early myths and folklore. However, these ideas and practices still survive in some circles today. This gemstone wouldn’t look out of place on any piece of jewellery and is especially suited for it’s use in the manufacture of rings.

In conclusion, for those looking to buy a gift for anyone whose birthdate is in March, a ring featuring either of the stones mentioned above will make a thoughtful and treasured one.

Free Gift With Every Order