This month we look at Topaz and Citrine which are birthstones for November and are associated with anyone who’s birthday falls at this time of year.

The most sought after is Imperial Topaz which is golden yellow in colour. Topaz is mentioned in the following verse of a Gregorian poem which was first published in 1870 by Tiffany & Co. 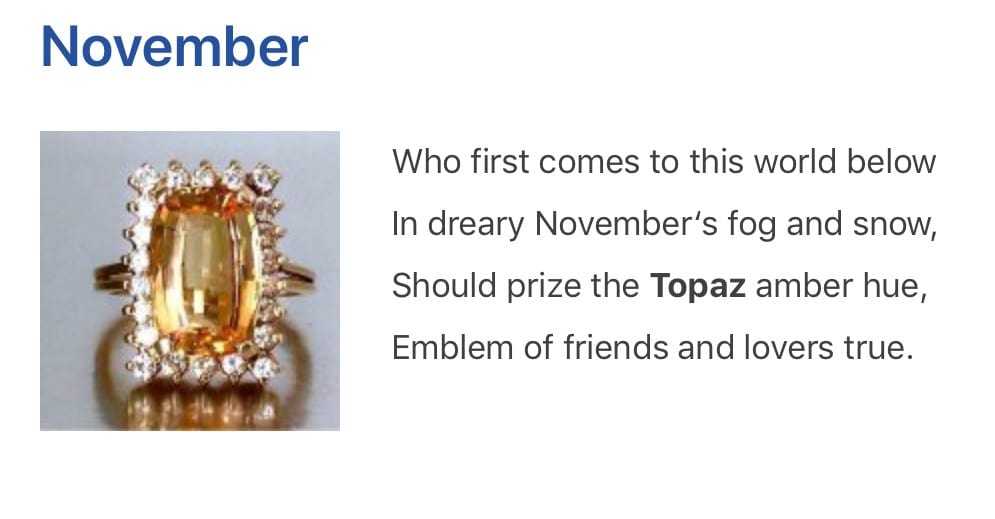 Why are there two birthstones for November?

Anyone who has a birthday in November has a choice of either Topaz or Citrine to wear as a birthstone.

Both gemstones can look identical and it may be difficult to see the difference with the naked eye. Topaz can exist in many colours but the yellow-gold variety is preferred as the birthstone for November which is also the natural colour of the less expensive semi-precious gemstone Citrine.

Although the two gemstones look very similar, they do not share the same properties or significance.

Topaz is a silicate mineral, composed of fluorine and aluminium. It has strong chemical bonds which create a very strong material similar to, but not as hard as, a diamond. Imperial Topaz has the required colour which represents strength and wisdom. It is believed to be associated with the Egyptian sun god, Ra.

Topaz has often been worn by royalty as it is a sign of luxury and is thought to protect the wearer from greed and evil as well as providing strength. It is also believed to have many healing properties and can help with blood disorders and other illnesses.

Citrine also comes in a range of colours from yellow to brown and is a variety of quartz. It tends to be much harder than Topaz and less expensive. Like Topaz this birthstone represents healing and positive energy. If you are feeling negative or unhappy, Citrine will help you regain a more positive attitude. As a semi-precious stone, Citrine can be a great alternative to Imperial Topaz if you are on a lighter budget. 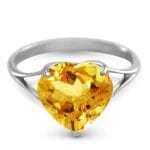 As both stones are known for their physical healing properties, November babies are considered very lucky. Topaz and Citrine are used in crystal healing to treat a variety of ailments from drug addiction to diabetes and fibromyalgia.

If Imperial Topaz is beyond your budget then Blue Topaz rings are less expensive and are more readily available. Visit QP Jewellers and Gemondo to see examples like the photos below: 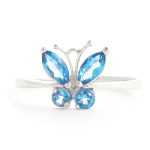 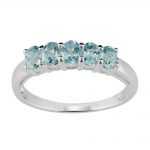 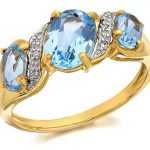 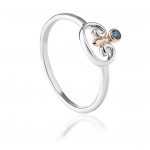 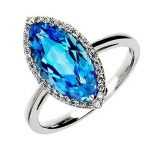 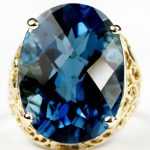 The March Birthstone - Bloodstone or Aquamarine?

[…] Bloodstone is also considered to be an alternative to Aquamarine as a birthstone for those born in March. Consequently, anyone whose birthday falls on this month has a choice of two gemstones as do those born in November […]