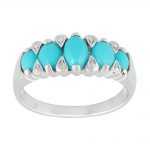 Turquoise, the birthstone for December, is believed to possess great metaphysical healing powers. This opaque gemstone has been extremely popular for many centuries with Egyptian, Tibetan and Native American cultures. The fascination attached to the stone has continued down through the centuries and it has been prized by many countries of the world for over 7000 years.

Some people claim that it creates a feeling that takes hold of a person who comes in contact with it for any length of time.

In addition, Turquoise is one of the oldest gemstones that has been mined and crafted into jewelry. The stone comes with a rich history and supposed energy that can be sensed and felt by those who wear it. Allegedly, Simply touching a piece of turquoise can connect your own energy with some of the deepest and most mysterious truths of our planet

Consequently, New Age believers think that crystal and gem healing is an art that is being rediscovered due the power of the earth’s energy being absorbed by these sacred stones. These beliefs are based on ancient practices that existed in some cultures around the world, many thousands of years ago. Let’s take a look at some of the most popular. 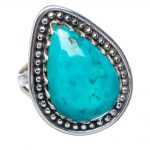 Turquoise or the “fallen sky stone” is an important element of Native American culture.

The Apache believed that if you reach the end of the rainbow after a thunderstorm, you will find turquoise

According to ancient beliefs, the gemstone signifies success, good health and longevity. This life giving gem is sometimes referred to as the stone of sky, stone of water and stone of blessings. It is believed to bring good fortune, protection and will help the wearer control any negative emotions. It’s positive healing energy can be used as an aid to improve mental functions and communication. It was also considered by Native Americans to be more precious than gold.

As a symbol of heavenly purity, Turquoise was used by Medicine men who claimed that it was capable of causing rain and preventing sickness. In addition it summoned helpful spirits while repelling demons and brought prosperity to it’s wearer.

These are bold claims indeed and may be enough to encourage you to believe that there is something very special about the birthstone for December. Let’s see what the Egyptians had to say: 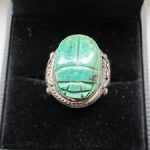 Like Native Americans the Ancient Egyptians also associated turquoise with protection especially of the deceased on their journey to the afterlife. The stone has been discovered in many Egyptian tombs as burial objects and it also associated with Hathor, the goddess of motherhood.

Apparently it has soothing properties that promote good circulation and vitality. Turquoise was first mined in Egypt around 8000 years ago. Collected by Cleopatra it was a common addition to wealthy tombs

Some of the Turquoise mines used by the ancient Egyptians in the Sinai Peninsula are still in use today. 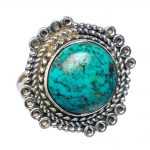 The use of Turquoise in Tibetan Culture is a little different to the civilizations mentioned earlier. The stone is central to religion, associated with the cycle of life and death and also the development of wisdom.

The wearing of Turquoise jewellery is popular with most civilians in Tibet in addition to Buddhist monks.

It is thought that Tibetans began mining the stone at roughly the same time period as the ancient Egyptians. It was first used as tributes on altars, presents for lamas and even on the royal crown of Nyatri Tsanpo, the first king of ancient Tibet in the 2nd century BCE

There are many myths and legends associated with Tibetan Turquoise. It is believed to protect travelers during a trip. Anyone who has the stone in their dreams will perhaps begin a new chapter in life. If the colour changes from blue to green, it maybe a sign of liver disease.

Turquoise is used to adorn most types of jewellery and hair accessories in Tibet. For rings, it is often mounted on Gold, Silver, Bronze or Cupronickel (white copper). Larger stones are normally reserved for men while women prefer a smaller more decorative item.

A unique gemstone suitable for any occasion 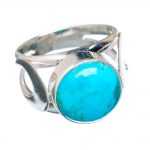 Interestingly enough, all three of the ancient civilizations mentioned above considered Turquoise an aid for protection and good health. Whether there is any truth in that theory remains a mystery. In any case there is no doubt that Turquoise is a magnificent looking gemstone and every piece of jewellery containing it, is totally unique. If you are one of those who was born in December, you are lucky to have Turquoise as your official birthstone. If not, there is no reason why you should not take advantage of it’s wonderful properties.

Finally, don’t forget the Gregorian poem made popular by Tiffany & Co in 1870:

If cold December gave you birth
The month of snow and ice and mirth
Place on your hand a Turquoise blue;
Success will bless whate’er you do.