You may have noticed that most jewellery made from precious metals such as gold, silver and platinum is stamped with small markings. This is commonly known as a hallmark. 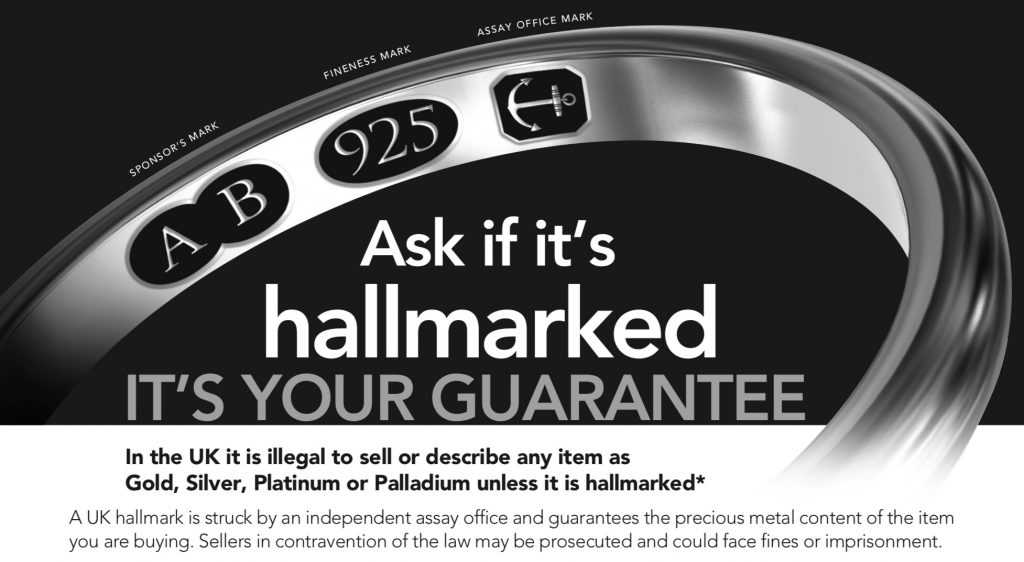 It is used to specify the grade of material used according to international standards. You may also notice small symbols are sometimes included. These represent other details such as the origin, makers name and date of manufacture.

The most common marking on a ring is a number which denotes the percentage of precious metal present.

As Gold and silver are both soft metals, it is not practical to use the pure metal for the manufacture of long lasting jewelry. For this reason an alloy containing other elements such as copper, zinc or nickel is preferred.

Silver is commonly mixed with a small percentage of copper and other metals to produce sterling silver. The resulting alloy is much more durable and easier to work with. Stirling Silver is normally stamped with the number 925. This number refers to the percentage of silver present which is 92.5%. The remaining 7.5% is the amount of other metals present.

You may also come across silver with the number 958 stamped on it. This is known as “Britannia Silver” and contains 95.8% pure silver.

Similarly gold is also made into an alloy for the manufacture of jewelry. There are several kinds which vary considerably in colour and cost.

The least expensive which is most commonly available in Europe is 9 karat gold. The amount of real gold contained is only 37.5% and pieces of jewelry are often stamped with the number 375 or 9K

A slightly higher grade of gold which is commonly used in the United States is 10 Karat. This is 41.7% gold and stamped with 417 to denote this.

Fourteen Karat gold is also used in the manufacture of jewelry. It is stronger than pure gold being 58.5% gold and 41.5% other elements. Consequently 14 K gold is normally stamped with the number 585 or 14K

22 Karat gold is stamped 916 or 22K and contains 91.6% gold. This variety is preferred for use in the manufacture of wedding rings

The purest gold which is used in the jewelry industry is 24 Karat. Technically pure gold should be 100%. However this kind of purity is almost impossible to achieve. Consequently, the purist gold available is 999.99% and referred to as “fine gold”.

Most commonly fine gold is 99.9% pure and stamped accordingly with the number 999. This is classed in jewelry circles as 24 Karat gold. 990 (99%) is also sometimes used as a hallmark  and although not 100% pure, it still qualifies as 24 Karat gold.

Most Asian gold is of this high quality and when traveling, you may notice the difference in appearance compared to the standard which is sold in many Western countries.

The colour of pure gold should be bright yellow. You may have seen white gold which looks more like silver or platinum. This is an alloy produced by adding palladium or nickel to produce a much lighter colour. A large percentage of copper (around 25%) is added to fine gold to produce “rose gold” which has a more pinkish colour.

In addition to the purity of the metal, other markings are included, especially on jewellery which originates in the UK and Ireland. For over 700 years a leopard’s head has been used as a hallmark for jewellery which originates from the London Assay Office. In Birmingham an anchor is used, Sheffield has used a rosette since 1974 which replaced a crown. Jewelry from the Edinburgh Assay office is stamped with a three-turreted castle and in Dublin a seated lady and a crowned harp has been used since the middle of the 17th century.

In 1972 a group of European nations signed an agreement “Vienna Convention on the Control of the Fineness and the Hallmarking of Precious Metal Objects” This was an attempt to help international trade. Since then, all articles are required to receive a “Common Control Mark” or “CCM” which states the fineness of the material and is a motif of balance scales. For gold it is displayed on two intersecting circles, a diamond shape for platinum and a letter “M” for silver is used.

The mark is recognized in at least 18 countries including the UK, The Netherlands, Scandinavia and the Ukraine.

Due to difference of opinion and standards between many countries, it has not been possible to attain a true International standard. You should be aware of this when buying jewelry from a country other than your own so please check any hallmark details before purchase.

What’s In A Hallmark? The Markings On Your Jewelry – Another Ringmania Blog

[…] with a small percentage of other elements to form an alloy. You can read more about that at our hallmark […]

Sterling Silver Rings- Something for everyone at Ringmania.

[…] manufacture of jewellery. Any finished rings that are offered for sale should be stamped with a 925 Hallmark denoting the purity of the silver in parts of 1000 […]